We spend an hour today visiting with Manape LaMere, one of the seven tribal leaders at Oceti Sakowin. We discuss what is likely to happen when the veterans arrive on Sunday, and I give him an update on the pipeline fight in Iowa. I share the sad news that Dakota Access today dragged pipe under the Des Moines River. There is also the positive news that pipeline fighters in Iowa continue to push back on every possible front. 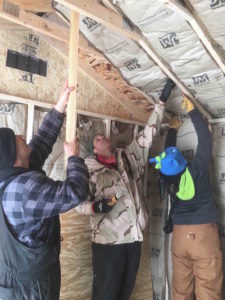 Manape is a gracious host, despite suffering from a bronchial infection. Lyssa offers to help. Among other hats Lyssa wears (including one that looks like a blue wombat), she’s a knowledgable herbalist. She pulls together a cocktail of a blend of essential oils for an intense, hot, nasal steam bath. Manape spends five minutes breathing in the healing moisture, saying, “If it doesn’t hurt, it’s probably not doing you any good.”

This afternoon, Lyssa and I work with Mekasi Horinek, director of Bold Oklahoma, to insulate one of the solar barns. These are small structures, shaped like a barn. They are basically a medium-sized bedroom, designed to provide plenty of heat and just enough space to withstand the onslaught of a North Dakota winter. An indoor kitchen and indoor bathroom will be available nearby. Funds for the barns were raised by the Bold Alliance. 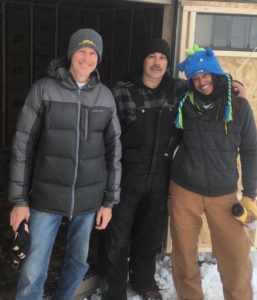 Mekasi has been at Standing Rock for the past four months and helped design the winter camp. In keeping with Native traditions, the camp is laid out in a half circle, with four large lodges in the center. Around them are tipis, and behind those are the solar barns.

Mekasi has a vision that this camp will be entirely sustainable, run without any fossil feels. In an age when we need to move quickly to combat the worst impacts of climate change, these solar barns demonstrate that Oceti Sakowin is not merely about stopping a pipeline. Yes, first and foremost, it is a spiritual and cultural revival. Yet it is also a movement demonstrating the eco-friendly technologies that allow us to move quickly toward an economy powered entirely by renewables.