Sunday, November 27, 2016. Nothing about Standing Rock is normal or predictable. As Lyssa and I approach the Oceti Sakowin camps just north of Cannon Ball, North Dakota, our GPS navigator announces, “In six miles, park your car and walk to your destination.”

We ignore these instructions, as well as the sign telling us that the road ahead is closed. “Is this right,” asks Lyssa. “Shouldn’t we have taken that turn back there?”

I confidently mutter a few words that belie my uncertainty. But we continue, and a few miles later over the crest of a hill, we gasp and fall silent. “Holy shit,” says Lyssa, as the sprawling, chaotic brilliance of Oceti Sakowin unfolds before us. The camps fill the valley, fill the imagination, defying all that is normal, conventional, acceptable.

I try to imagine the tipis of the Great Sioux Nation that once occupied these lands many years ago. I’m reminded that this movement is not simply about stopping an oil pipeline. As a coalition of our Native allies wrote, “Our fight is not just about a pipeline project. It is about 500 years of colonization and oppression. This is our moment, a chance to demand a future for our people and all people.”

There’s a check point at the camp entrance, and a young Native man tells us where to drop off donations. We have food, clothing, blankets and medical supplies, and each needs to be delivered to a different location. We get lost multiple times, ask directions, and each time receive conflicting instructions. The chaos visible from afar is quickly verified up close.

With our deliveries accomplished, we head across the Cannon Ball River to look for Mekasi Horinek, my colleague from Bold Oklahoma. We’re hoping to pitch our tent in Mekasi’s “neighborhood.” But given the massive size of the camps and nonexistent cell phone service, we’re unable to find him. 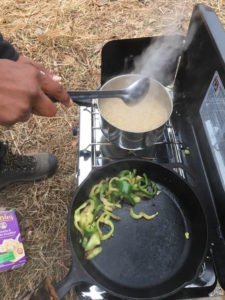 Food service at the camps is stretched to the max, so we want to be as self-sufficient as possible. We set up our tent in a spot out of the wind on the south side of the Cannon Ball River. Lyssa pulls out her stove, and in less than an hour we’re enjoying a delicious meal of mac and cheese with peppers from my garden in Des Moines.

At dusk, along with a couple thousand other water protectors, we head to the nearby casino for a benefit concert featuring Jackson Browne and Bonnie Raitt. Lyssa strikes up a conversation with a man who tells her he was in favor of the pipeline until just last week. He’s very offended by the violent tactics used against peaceful protestors, and now dead set against the pipeline. He thanks Lyssa for being here, thanks her for speaking out, and gives her a casino voucher worth $21.95.

The last few weeks, I’ve heard from more and more people who haven’t been involved with the pipeline fight but are now fired up and taking action. Opposition to fossil-fuel extraction and infrastructure is only going to continue to grow.

As we leave the concert, it’s just starting to snow. We crawl along, following a long line of vehicles back to the camps. This is Lyssa’s first time ever sleeping in a tent, and I tease her about her good fortune. “Not only do you get cold temps but you get snow, too.”

I am confident we can stay warm and dry. Any discomfort we encounter while tenting will be minimal compared to the hardship and injuries inflicted on water protectors who have been attacked mercilessly by law enforcement on several occasions.

Whether or not we’ll encounter such violence remains to be seen. Tomorrow, we hope to meet with camp leaders, share with them an update on what’s happening on the pipeline in Iowa, and help build cold-weather structures for those planning to stay at Standing Rock through the winter.